Vancouver, B.C. – August 15, 2016 – Oil and gas exploration and production company, TAG Oil Ltd. (TSX: TAO and OTCQX: TAOIF) is pleased to report first quarter results for the fiscal year ending March 31, 2017, in which the Company has continued with its strategy to preserve capital by continuing to reduce its capital expenditures and focus on field optimization opportunities, prospect generation and capitalize on distressed asset acquisitions.

Oil and gas production has continued to be steady and is above guidance with a current net daily average rate of 1,237 BOE/d (81% Oil) over the month of August.

Even with the cut back on capital expenditure, TAG has realized an increase in its oil and gas sales subsequent to the quarter end including the recent testing of 254 bbl/d of light oil and condensates from a lower unproduced interval in an existing Sidewinder field wellbore.

“Despite the low oil price environment and substantially scaled back capital expenditure, we have continued to make progress as each fiscal quarter passes towards once again growing our production and reserve base. With our COO, Henrik Lundin, now firmly planted in our New Zealand operations office, and a much stronger technical and business development team in place, I am pleased with the advances that have been made. The low oil price environment has created opportunity for TAG with the acquisition of the Puka discovery acreage, along with the successful uplift from workovers at Cheal and Sidewinder, is a testament to this progress. The testing of over 250 bbl/d of light oil and condensates from a bypassed interval at the Sidewinder field is quite encouraging, and should provide a significant and welcome production uplift going forward,” commented TAG Oil CEO Toby Pierce. 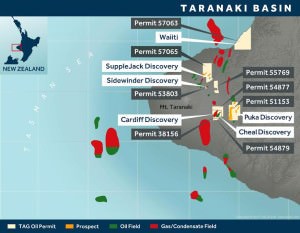 The Cheal B Mt. Messenger pool has been identified as the first phase of a larger water flood project within the greater Cheal area. This project has been delayed by approximately two months due to an engineering re-design, which will allow TAG to inject more water at increased rates and lower costs than originally planned. The water flood project will aim to improve recovery and reserves from the Cheal B Mt. Messenger pool. The project includes re-completion of Cheal-A9, water flood pumps at Cheal A site, and converting Cheal-A2 into an injection well. Planning for re-completion of Cheal-A9 is currently underway; following completion, the water injection will commence and production response will be monitored throughout Q2 2017.

The water flood project has also been scoped at Cheal E site for implementation throughout Q2/Q3 2017. This will involve the provision of additional pumps and associated equipment, as well as potentially converting Cheal-E7 into an injection well.

Recently, TAG successfully tested 254 bbl/d of light oil and condensate from a lower unproduced interval in the Sidewinder mining permit (PMP 53803) over a 24-hour period using a temporary gas lift system. The Company has designed a permanent liquids production facility, which will allow TAG to continually produce liquids at Sidewinder and is expected to commence full time operation in two to three weeks’ time. Optimization workovers of Cheal-A3X, E4 and E8 at the end of Q1 2017 were completed and resulted in a production uplift of approximately 90 BOE/d.

TAG will continue to work towards achieving the following goals:

At Puka, TAG (70%) and its joint venture partner, MEO Australia Limited (30%), have agreed on a work program for the remainder of 2016 and will look to establish future plans for the acreage including putting the suspended Puka wells, which produce oil from the Mt. Messenger formation, back online. The joint venture is committed to drilling one well on the Puka permit by Q4 2018 at a location and target depth to be determined.

Upcoming activities include preparation for drilling of the Cheal-E8 and E9 exploration wells, Cheal-B6 and B7 workovers, and a rod pump project for Cheal-E5 that is likely to commence in September 2016. Given the recent excellent production result at Sidewinder, there is also the potential for TAG to convert additional Sidewinder wells into oil production wells. Further, the Company is assessing several other similar by-passed pay opportunities in the portfolio to enhance production in the near to medium term.

Despite lower oil prices and a reduced appetite for risk in global equity markets, TAG is a financially strong entity that is well positioned for the future. Further, the Company is preparing to begin growing its production and reserves base again through exploration drilling on attractive prospects along trend with existing production.

TAG Oil Ltd. (https://www.tagoil.com/) is a development-stage oil and gas company with extensive operations, including production infrastructure in the Taranaki Basin region of New Zealand. As one of New Zealand’s leading operators, TAG is positioned for long-term reserve-based growth with attractive exploration activities in the lightly explored Taranaki-region discovery fairway. As a low cost, high netback oil and gas producer, TAG is debt-free and reinvests its cash flow into development opportunities and step-out drilling along trend with the Company’s existing production.

TAG Oil has adopted the standard of six thousand cubic feet of gas to equal one barrel of oil when converting natural gas to “BOEs.” BOEs may be misleading, particularly if used in isolation. A BOE conversion ratio of 6 Mcf: 1 Bbl is based on an energy equivalency conversion method primarily applicable at the burner tip and does not represent a value equivalency at the wellhead.