Vancouver, B.C. – November 14, 2016 – Oil and gas exploration and production company, TAG Oil Ltd. (TSX: TAO and OTCQX: TAOIF, “TAG”) is pleased to report second quarter results for the fiscal year ending March 31, 2017, in which oil and gas production increased and continues to be steady and is above guidance with a current net daily average rate of 1,227 BOE/d (83% Oil) over the month of November to date.

TAG remains focused on preserving capital, as well as field optimization opportunities, prospect generation and assessing strategic acquisition opportunities in New Zealand and Australia. TAG is also in the process of preparing to once again grow its production and reserves base through exploration drilling.

TAG Oil CEO Toby Pierce commented “I am pleased to report another successful quarter where TAG has continued to make meaningful progress in both our core New Zealand assets and with the signing of a definitive agreement for our first Australian acquisition. In addition to commencing waterflood activities at Cheal, significant oil production was established with the workover of the Sidewinder-1 well. Coupled with the recently announced preliminary testing of the Supplejack-1 well, TAG has now identified two potential new revenue streams for relatively low cost. TAG remains in a strong financial position, and we are looking forward to growing the company while maintaining capital and operational discipline.”

The Cheal B Mt. Messenger pool has been identified as the first phase of a larger waterflood project within the greater Cheal area. TAG’s enhanced recovery waterflood project commenced on September 21, 2016, with the start of water injection at the Cheal-B3 well at a rate of 400 BW/d. The water injection rate has increased to 1,700 BW/d and the pressure response in the reservoir is being monitored. TAG estimates that it could take six to nine months to see a production response from water injection. 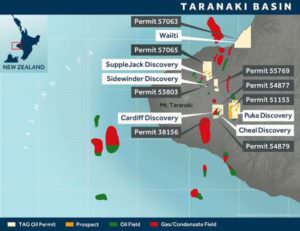 Cheal A Mt. Messenger pool waterflood has progressed with Cheal-A2 injection conversion project being implemented and expected to be completed during Q3/Q4 2017. Pressure support is expected to double the recovery factor, resulting in incremental production and reserves. A small scale waterflood at the Cheal-A3X well has already shown potential to enhance the recovery of oil in TAG’s Cheal permits. Following the start of water injection, production rates increased over 43 months followed by a slower decline than previously seen on primary production. The recently recompleted water well at Cheal-A9 is capable of producing approximately 4,500 barrels of water per day, which is currently expected to be more than sufficient to meet water injection demands at all three potential injection sites.

Engineering for the waterflood project has commenced at Cheal E site, with project execution planned throughout Q3/Q4 2017. This will involve the provision of additional pumps and associated equipment, as well as converting one of the wells into an injection well. A workover was also completed to install a rod pump at the Cheal-E5 well, which has been shut-in since May 2015. Start-up commenced early October 2016 and the well is producing approximately 75 BOE/d (gross). In addition, the joint venture submitted an application in early November to New Zealand Petroleum and Minerals to convert Cheal ‘E’ from an exploration license to a mining license. This will allow the joint venture to commence water injection into the Cheal ‘E’ pool upon receipt of the mining license.

A low-cost recompletion to an existing wellbore at Sidewinder demonstrated the potential of a previously unproduced oil leg following testing. Since August 18, 2016, when equipment was installed allowing for 24-hour oil production, the well has been on stabilized flow at an average of approximately 180 B/d.

Further, due to recently discovered mechanical issues in the Cheal-B5 well, an additional 85 BOE/d remains offline. Following the Cheal-E5 rod pump installation, operations moved to Cheal- B5 and suspended the well. Options to return the well to production will be considered at a later date. Also, the main export gas compressor at the main Cheal production station was offline from September 14, 2016 to October 21, 2016 following a significant mechanical failure incident after it was returned to service after planned maintenance. Much of the gas is used as fuel for power generation, however a moderate amount was flared to ensure continued safe operations.

On October 30, 2016, TAG announced it had signed a definitive agreement to acquire the PL-17 production license in the Surat Basin of Australia for a total consideration of AUD$2.5 million to be paid over three years. The 25,700 acre block currently has 15 B/d of oil production from two wells and several exploration and appraisal prospects. TAG is currently working through the outstanding conditions of the definitive agreement required to close the transaction and is preparing to take over operatorship.

On November 8, 2016, TAG announced that it had successfully tested the Supplejack-1 well at rates of over 7 mmcf/d. Further testing of the well is underway along with planning on how to best unlock the resource is being investigated.

TAG will continue to work towards achieving the following goals:

At PEP 51153 (Puka), TAG (70%) and its joint venture partner, Melbana Energy Ltd. (formerly MEO Australia Limited) (30%), have agreed on a work program for the 2016/17 financial year and will continue to develop plans for the acreage. The joint venture is assessing drilling of a well on the permit by Q4 2018 at a location and depth to be determined. With proven production and several exploration targets identified, this is a complimentary addition to the TAG portfolio where TAG can apply its extensive technical and operations experience in the Taranaki Basin.

Upcoming activities include preparation for drilling of the Cheal-E8 and E9 exploration wells, and Cheal-B6 and B7 workovers. Given the recent excellent production result at Sidewinder, several additional gas wells at Sidewinder and at Cheal are now being reviewed as candidates for recompletions as oil producers to enhance production in the near to medium term.

TAG continues to be one of New Zealand’s leading operators and is positioned for reserve-based growth with high impact exploration upside in the lightly explored Taranaki discovery fairway. As a low cost, high netback oil and gas producer, TAG is debt-free and reinvests its cash flow into development opportunities and exploration drilling adjacent to the TAG’s existing production. Despite lower oil prices and a reduced appetite for risk in global equity markets, TAG is financially strong and well positioned for the future.

TAG Oil Ltd. (https://www.tagoil.com/) is a development-stage oil and gas company with extensive operations, including production infrastructure in the Taranaki Basin region of New Zealand. As one of New Zealand’s leading operators, TAG is positioned for long-term reserve-based growth with attractive exploration activities in the lightly explored Taranaki-region discovery fairway. As a low cost, high netback oil and gas producer, TAG is debt-free and reinvests its cash flow into development opportunities and step-out drilling along trend with TAG’s existing production.

TAG Oil has adopted the standard of six thousand cubic feet of gas to equal one barrel of oil when converting natural gas to “BOEs.” BOEs may be misleading, particularly if used in isolation. A BOE conversion ratio of 6 Mcf: 1 Bbl is based on an energy equivalency conversion method primarily applicable at the burner tip and does not represent a value equivalency at the wellhead.

Statements contained in this news release that are not historical facts are forward-looking statements that involve various risks and uncertainty affecting the business of TAG. Such statements can generally, but not always, be identified by words such as “expects”, “plans”, “anticipates”, “intends”, “estimates”, “forecasts”, “schedules”, “prepares”, “potential” and similar expressions, or that events or conditions “will”, “would”, “may”, “could” or “should” occur. All estimates and statements that describe TAG’s objectives, goals, or future plans relating to operations are forward-looking statements under applicable securities laws and necessarily involve risks and uncertainties. Actual results may vary materially from the information provided in this release, and there is no representation by TAG that the actual results realized in the future will be the same in whole or in part as those presented herein.