Vancouver, B.C. – April 19, 2018 – International exploration and production company, TAG Oil Ltd. (TSX: TAO and OTCQX: TAOIF), reports that it has secured a revolving credit facility of up to US$10,000,000 with a large New Zealand based lender.

The revolving credit facility, which is secured against TAG Oil’s producing Taranaki Basin assets, has been put into place for an initial period of 12 months. The facility can be drawn by TAG Oil upon request, with balances charged at an interest rate of LIBOR + 3.0% per annum. As part of the credit facility, TAG Oil has agreed to hedge approximately 400 bbl/d of oil production for the 12-month period using a collar with a US$60/bbl floor and a US$75/bbl cap. 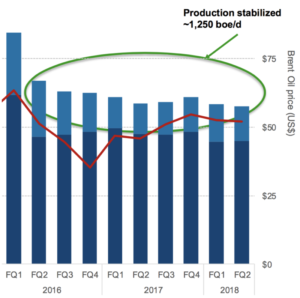 Over the coming months ahead, TAG Oil will remain focused on low-risk, infield operations with a view to incrementally grow high netback production in Taranaki. These operations include bringing behind pipe production online, waterflood improvements, field optimization and potential commercialization of the Puka and Supplejack fields.

TAG Oil also announces the approval to grant up to 2,400,000 share options at a price of $0.50 per share to various directors, executive officers, employees and consultants. This is part of TAG Oil’s ongoing strategy of granting share options to attract and retain talent, as well as motivating its team to work towards ensuring the success of TAG Oil.

Statements contained in this release that are not historical facts are forward-looking statements that involve various risks and uncertainty affecting the business of TAG Oil. Such statements can generally, but not always, be identified by words such as “expects”, “plans”, “anticipates”, “intends”, “estimates”, “forecasts”, “schedules”, “prepares”, “potential” and similar expressions, or that events or conditions “will”, “would”, “may”, “could” or “should” occur. All estimates and statements that describe TAG Oil’s plans relating to operations are forward-looking statements under applicable securities laws and necessarily involve risks and uncertainties. Actual results may vary materially from the information provided in this release, and there is no representation by TAG Oilthat the actual results realized in the future will be the same in whole or in part as those presented herein.

Other factors that could cause actual results to differ from those contained in the forward-looking statements are also set forth in filings that TAG Oil and its independent evaluator have made, including TAG Oil’s most recently filed quarterly financial reports, AIFs and reports in Canada under National Instrument 51-101, which can be found under TAG Oil’s SEDAR profile at www.sedar.com. TAGOil undertakes no obligation, except as otherwise required by law, to update these forward-looking statements in the event that management’s beliefs, estimates or opinions, or other factors change.

Disclosure provided herein in respect of boe (barrels of oil equivalent) may be misleading, particularly if used in isolation. A boe conversion ratio of 6 Mcf:1bbl is based on an energy equivalency conversion method primarily applicable at the burner tip and does not represent a value equivalency at the wellhead.