“We continue to make significant progress on our strategy to deliver long-term shareholder value across all fronts within TAG, as well as achieving consistent profitability which has differentiated us from others in our international peer group,” said Garth Johnson, TAG Oil Ltd. Chief Executive Officer. “With record production revenues, cash flow, and profits, and following completion of extensive infrastructure upgrades which are critical to facilitate anticipated growth, we have increased operational flexibility, which has resulted in committing to New Zealand’s most active and diverse exploration campaigns in the country’s history. We are confident TAG can continue to deliver value through organic production growth within an extensive drill-ready prospect portfolio consisting of low-risk shallow Miocene development and step out wells, and leverage this cash flow into high-impact deep Eocene conventional wells and unconventional prospects in the East Coast.”

TAG continues to achieve record revenues including net income and cash flow. Operating netbacks of $78 per barrel of oil continue to be substantially higher than what is being achieved in North America, resulting in efficient payback of capital costs and long-term profitable operations. 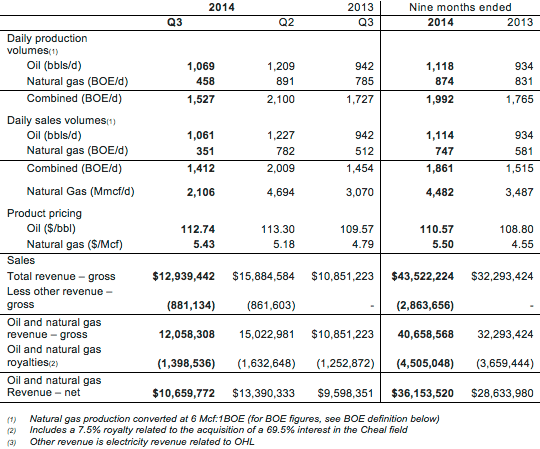 Over the past several years, TAG has focused its efforts on developing the shallow Miocene targets (~2000 meters’ depth), with excellent success, as shown by thirty-one successful wells drilled to date. Given this success, TAG has added a deep Eocene drilling component to its Taranaki Basin operations with a goal to capture reserves several times larger than what is being achieved in the shallow Miocene drilling program. In the current quarter, TAG successfully drilled, logged and cased its first deep Eocene well, Cardiff-3, which intersected 45 meters (148 feet) of potential pay in the successful Kapuni Formation. The Company anticipates production testing this well in the near future. An independent assessment was prepared by Sproule International Limited with an effective date of July 31, 2013, which has estimated the undiscovered resource potential on the Cardiff prospect on a P50 basis at 160 billion cubic feet gas and 5.59 million barrels of natural gas liquids(1). Sproule is a qualified reserves evaluator in accordance with NI 51-101 and the Canadian Oil and Gas Evaluations Handbook. 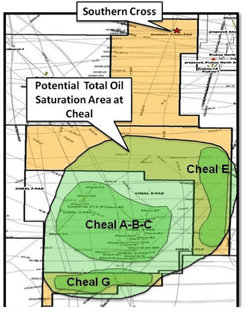 TAG Oil’s shallow Miocene drilling program has continued concurrently with the deep Eocene drilling program; most recently eight oil wells have been drilled from the Company’s Cheal-E and G sites, delineating a much larger oil saturated area than originally anticipated at the Cheal field. Utilizing TAG’s 100% owned processing infrastructure, testing and first production has commenced on three of the five wells drilled from the Cheal E Site, with over 50,000 barrels of light oil produced to date from the new discovery site. The recent drilling success in the Cheal-E and G sites provides TAG with many years of low-risk development drilling opportunities and additional step out locations, such as the coming Southern Cross well that could further expand the scope and size of the Cheal pool.

TAG has now received the results of the Reservoir Characterization Study (“RCS”) from independent experts in unconventional plays on the Ngapaeruru-1 well, the first ever East Coast Basin unconventional test well. The RCS study provides the first true unconventional data set ever acquired in the East Coast Basin and provides a number of encouraging attributes, and important confirmation that TAG’s drilling mudlog interpretations from the Ngapaeruru-1 well demonstrate that oil is being generated in the Whangai source rocks.

Given the results of the study, TAG will now perforate and production test Ngapaeruru-1 in the coming months, with the goal being to prove the concept of moveable hydrocarbons from within the source rocks, a critical step to pursuing the economic viability of this unconventional play.

Details of the RCS report indicate a number of positives with respect to the Whangai source rocks as a viable unconventional oil target:

a) The Whangai Formation source rock penetrated in Ngapaeruru-1 is 293 meters thick, it’s highly naturally fractured, the fractures are open, and each fracture zone correlates well with elevated oil and gas mudlog shows.

b) The hydrocarbon-filled porosity exceeds the minimum standard thresholds for unconventional reservoirs.

g) A deeper basinal setting (which is planned for the next two wells in the program) will look to identify increased TOC contents of the reservoir, which at Ngapaeruru-1 is slightly less than 1% (with 2% being the standard threshold), indicating subsequent wells may be more optimally located to intercept the ideal source rock origin.

The quality of the data set acquired at Ngapaeruru-1 is state-of-the-art, and, as expected, has provided the first ever specialized interpretation necessary to help unlock the major potential of this unconventional play.

TAG Oil has adopted the standard of six thousand cubic feet of gas to equal one barrel of oil when converting natural gas to “BOEs”. BOEs may be misleading, particularly if used in isolation. A BOE conversion ratio of 6Mcf: 1 Bbl is based on an energy equivalency conversion method primarily applicable at the burner tip and does not represent a value equivalency at the wellhead.

Undiscovered Petroleum Initially-In-Place (equivalent to undiscovered resources) is that quantity of petroleum that is estimated, on a given date, to be contained in accumulations yet to be discovered. The recoverable portion of undiscovered petroleum initially in place is referred to as “prospective resources,” the remainder as “unrecoverable.”

Prospective resources are those quantities of petroleum estimated, as of a given date, to be potentially recoverable from undiscovered accumulations by application of future development projects. Prospective resources have both an associated chance of discovery and a chance of development. There is no certainty that any portion of the resources will be discovered. If discovered, there is no certainty that it will be commercially viable to produce any portion of the resources.

Exploration for hydrocarbons is a speculative venture necessarily involving substantial risk. TAG’s future success in exploiting and increasing its current reserve base will depend on its ability to develop its current properties and on its ability to discover and acquire properties or prospects that are capable of commercial production. However, there is no assurance that TAG’s future exploration and development efforts will result in the discovery or development of additional commercial accumulations of oil and natural gas. In addition, even if further hydrocarbons are discovered, the costs of extracting and delivering the hydrocarbons to market and variations in the market price may render uneconomic any discovered deposit. Geological conditions are variable and unpredictable. Even if production is commenced from a well, the quantity of hydrocarbons produced inevitably will decline over time, and production may be adversely affected or may have to be terminated altogether if TAG encounters unforeseen geological conditions. TAG is subject to uncertainties related to the proximity of any reserves that it may discover to pipelines and processing facilities. It expects that its operational costs will increase proportionally to the remoteness of, and any restrictions on access to, the properties on which any such reserves may be found. Adverse climatic conditions at such properties may also hinder TAG’s ability to carry on exploration or production activities continuously throughout any given year.

The significant positive factors that are relevant to the resource estimate are: Proven production in close proximity;

The significant negative factors that are relevant to the resource estimate are:

Statements contained in this news release that are not historical facts are forward-looking statements that involve various risks and uncertainty affecting the business of TAG. Such statements can be generally, but not always, identified by words such as “expects”, “plans”, “anticipates”, “intends”, “estimates”, “forecasts”, “schedules”, “prepares”, “potential” and similar expressions, or that events or conditions “will”, “would”, “may”, “could” or “should” occur. All estimates and statements that describe the Company’s objectives, goals, production rates, test rates, optimization, infrastructure capacity timing of operations and or future plans with respect to the drilling and testing in the Taranaki and East Coast Basins are forward-looking statements under applicable securities laws and necessarily involve risks and uncertainties including, without limitation: risks associated with oil and gas exploration, development, exploitation and production, geological risks, marketing and transportation, availability of adequate funding, volatility of commodity prices, environmental risks, competition from other producers, and changes in the regulatory and taxation environment. Actual results may vary materially from the information provided in this release, and there is no representation by TAG Oil that the actual results realized in the future would be the same in whole or in part as those presented herein.

Other factors that could cause actual results to differ from those contained in the forward-looking statements are also set forth in filings that TAG and its independent evaluator have made, including TAG’s most recently filed reports in Canada under NI 51-101, which can be found under TAG’s SEDAR profile at www.sedar.com.

TAG undertakes no obligation, except as otherwise required by law, to update these forward-looking statements in the event that management’s beliefs, estimates or opinions, or other factors change.

View PDF > Back to News Releases >