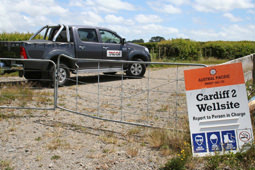 This sign will be changing soon. This is the entrance to the Cheal “C” site, which happens to be our new Cardiff site on PMP 8156-D.

TAG Oil is now the proud holder of PMP 38156-D. It’s within the same permit boundary as our PMP 38156-S, where we’re producing oil and gas and developing discoveries in shallower formations. This ends the old permit split and TAG now controls 100% of all prospective formations within PMP 38156.

The Cardiff structure has been identified as a large anticlinal trap, some 12 km long by 3 km wide, with a number of potential pay zones within the Kapuni Sands Formation. Situated on trend and among several sizable deep gas/condensate discoveries including nearby landmark Kapuni and the prolific Mangahewa and Pohokura gas fields, the Cardiff gas/condensate discovery has the potential to become a substantial resource.

Gas with rich condensates was discovered at Cardiff within the upper Kapuni zone, which encountered 12m of net pay and flowed at over 3 million cubic feet and 100 barrels of condensate (light oil) per day with improving rates observed on long-term testing. This zone can be identified on 3D seismic to be a prospective target across the span of the Cardiff structure. And an even greater resource potential exists in the deeper K1A and K3E zones, where strong gas shows were encountered over a gross 600m interval. This will be a primary target in future Cardiff wells.