What did past OPEC cuts accomplish?

As reported on the TAG Oil blog (and every other stock watch and natural resources outlet), OPEC  announced on November 30 that they’d agreed to cut production in hopes of reviving oil prices after a two-year slump (see our 12/1 post).

But what will the production cut accomplish?

The past is always a good indicator of what might happen in the future…and we happen to have a chart for that. The EIA chart below shows what OPEC production cuts in 2008, 2001 and 1998 did for oil prices in the ensuing 104 weeks. Oil prices rallied then, and so far it looks as though the 2016 cut will follow suit—but only time will tell. 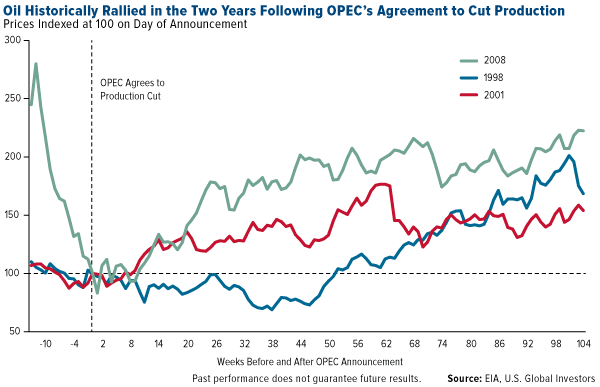